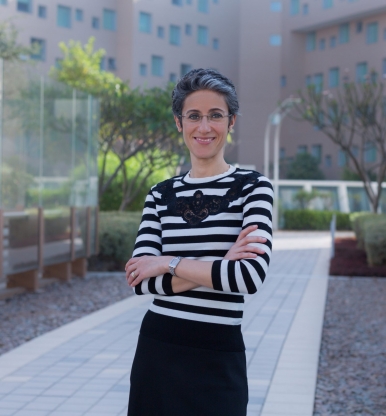 Dr. Laila Familiar, Senior Lecturer of Arabic at New York University in Abu Dhabi, is an expert in Teaching Arabic as a Foreign Language, curricular design, and teacher training. With over 20 years of experience teaching and overseeing various language programs in the Middle East and the U.S., Laila serves currently as academic consultant at American Councils for International Education for the teaching of Arabic.

She is recipient of the Texas Foreign Language Teaching Excellence Award from the University of Texas at Austin and holds a PhD in Teaching Arabic as a Foreign Language with a focus on literacy, corpus linguistics and curricular design from La Universidad Autónoma de Madrid.

Previously, Laila was a lecturer of Arabic and the Director of the Arabic Summer Institute at the University of Texas at Austin, and served as the Academic Director of the Critical Language Scholarship Program in Fes, Morocco. Proficient in multiple languages and Arabic dialects, she has also taught Arabic language and content-based courses at the American University in Cairo, the Center for Arabic Study Abroad program in Egypt, and Middlebury College.

Laila is the founder of Khallina, a website dedicated to the teaching and learning of Arab culture(s) through open source audiovisuals. She is also the editor of the abridged novels Sayyidi wa Habibi (2013) and Saaq al-Bambuu (2016) for learners of Arabic, and the translator of La Tía Safeyya y el Monasterio (2000), a novel by Egyptian author Bahaa Taher.

In the field of assessment, Laila was actively involved in the development of several Arabic proficiency tests, including an online listening and reading proficiency test sponsored by the National Middle East Language Resource Center and the Arabic Flagship Program, as well as revising the American Council on the Teaching of Foreign Languages proficiency guidelines for Arabic.

Her current research projects include a frequency dictionary of the most commonly used 2,000 words in contemporary Arabic fiction (Routledge, 2021), a set of graded readers for Arabic learners, and a textbook for the teaching of Modern Short Stories for advanced learners of Arabic.